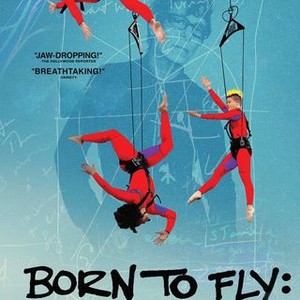 One of the aspects that you will notice throughout the course of the documentary film is the intense desire Streb has to invent unprecedented movement, and putting it in context of a dance avant-garde that dates back to Tisha Brown, who made use of harnesses and ropes to allow performers to make their way down walls like they were sidewalks.

Interviews with former and current Sreb performers emphasize how dangerous these performances can be. Although it is tempting to judge the Choreographer for some of the risks that she allows her dancers to take, it is worth noting that boxers, bull-riders, and circus clowns do equally risky maneuvers as a matter of course. Such a comparison may attract scrutiny to the choreographer’s high art claims, and Catherine Gund opts to exclude any external voices that might challenge the artistic authenticity of this body of work.

Whether one refers to it as mere entertainment, art, or sport, some of it is simply jaw-dropping. Although the performance footage may cut before the viewer is satisfied, the end of the documentary features a long section that more than compensates for it. On the eve of the London Olympic Games of 2012, Elizabeth Streb launched a series of performances ending in one in which the huge London Eye played the role of a spinning stage for the choreographer’s dare-devil dancers. In this part, more than any other party of Born To Fly the viewer begins to comprehend the elation that has to balance the high risks that Elizabeth Streb’s dancers take.

It is easy to understand why the adjective “grisly” is one of Elizabeth Streb’s favorites. In Born To Fly, the performers–each of whom the audience is forced to conclude are certainly bonkers–dodge I-beams and throw themselves against plexiglass with cult-like commitment. The breathtaking and dazzling documentary Born To Fly is all motion and joy. Catherine Gund, the film’s director carefully takes us through the artistic journey of Elizabeth Streb through Haight-Ashbury in the seventies to the cozy cluttered SoHo building where she shares with Laura Flanders. Rehearsal and performance footage shows an oeuvre committed to defying physiological limitations and physics, as well as an architect’s eye for symmetry. An Avante Garde and singularly focused talent, Elizabeth Streb bends high-risk routines to her invincible will. And if jarred joints and wounded buildings follow along, they are a simple price to pay when your life-long goal is to see people fly.